" Tomorrow, I am going to school wearing a girl's sailor suit school uniform. This is my test of courage ! "

---Nitori Shuichi (Episode 9 of the anime)

Shuichi Nitori (二鳥 修一 Nitori Shūichi) is the protagonist of Wandering Son. Their name is spelled " Shuichi" in the anime, but is spelled " Shuuichi " in the manga. This is the profile page of the Main Character of the Wandering Son Anime', Nitori Shuichi. Shuichi was assigned male at birth (AMAB), but, throughout the series, shows an affinity for presenting as their correct gender of a young female. The anime follows Shuichi's life from the first day of Middle School, to when they are in High School, and they produce a stage play and present it in the high school's theater. They are voiced by Kousuke Hatakeyama in the anime.

Shuichi has brown eyes and brown hair depicted in varying shades; most often a dark tone.

Shuichi owns a long, hime ( princess ) cut wig that is somewhat lighter in tone than their natural hair color. In high school, they buy a bob wig of an unknown color; judging from the shading, it might be red. In fifth grade, they are given a sailor fuku ( a girl's sailor suit school uniform ) that used to belong to Yoshino Takatsuki's older sister.

As a toddler, Shuichi has a medium-length bob hairstyle. At an older age, around five or six, they have a bowl cut. For most of the manga and anime, they have short hair with bangs. In middle school, after the incident where they went to school in a girls' uniform, they grow their hair out into a bob. Later on, they cut it into a pixie. It grows back out over time, and, by the end of the manga, it is a similar length to their original style, but the bangs are different.

Shuichi is often stated as looking androgynous, to the point where they are often able to be seen out in public as a girl, even while presenting masculine. In seventh grade, they begin showing major signs of puberty, such as hitting growth spurts and their voice changing. They look a lot like their sister, Maho Nitori; especially when they grow their hair out.

Shuichi, otherwise known by the nicknames Shuu (シュウ Shū) and Nitorin (にとりん Nitorin)), is described as a young, quiet, docile, and effeminate child, who, at the beginning of the series, is in the fifth grade of elementary school. Shuichi wants to be a girl, often dressing in feminine attire. They are described as cute by many of the other characters, especially Saori and Anna, and is able to easily present in public as a girl with their feminine features and physical build. Shuichi enjoys wearing pretty clothes, and is encouraged by their friends, Yoshino Takatsuki and Saori Chiba, to dress and act very feminine.

Shuichi exhibits signs of gender dysphoria. As they grow up, puberty becomes a topic of increasing concern: growing body hair, a deepening voice, and the onset of acne are all subjects to worry about. Shuichi also shows an attraction to two characters, at different times, in the series: Yoshino and Anna Suehiro. Shuichi and Anna date for a time in junior high, until Anna breaks off their relationship due to her inability to show compassion. However, the two soon resume their intimate friendship and dating relationship with each other.

Shuichi is mostly interested in indoor activities, and does not partake in activities favored by boys of the same age, such as playing sports. Shuichi enjoys baking and is skillful in baking sweet pastry and the like, though they are never shown cooking other, more conventional foods. After starting an exchange diary with Yoshino, they become interested in writing stories. After co-writing a gender non-conforming rendition of Romeo and Juliet with Saori, Shuichi and Saori both join the drama club in junior high school. Next year, Shuichi, together with Doi, write the script for another gender non-conforming play.

Shuichi has an honest personality, and gets along well with others. As a child, Shuichi has an obedient, dutiful attitude; however, upon entering puberty, they sometimes experience outbursts of intense emotion. Shuichi can be overly sensitive at times, and is often shown crying in front of others. Yet, Shuichi can also have an iron will and a defiant attitude, as when they went to school wearing a girl's sailor suit uniform, regardless of what others, teacher and students alike, thought of or said. Due to these personality traits, it is easiest for Shuichi to associate with girls of their own age, and avoid any interaction with boys. As such, Shuichi has few male friends, Mako being an exception.

Throughout the series, Shuichi shows a desire to switch names with Yoshino. Toward the end of the manga series, Shuichi begins using the name Lily at work, but it is unknown if that is their preferred name.

With Yoshino Takatsuki: They have known each other since childhood. At one point, Shuichi expresses their intimate feelings toward Yoshino, but suchlike feelings were not reciprocated at the time. Near the end of the story, Yoshino expresses similar feelings towards Shuichi, but Shuichi has been in a relationship with Anna for some time, and cannot reciprocate Yoshino's feelings.

Shuichi has one other sibling: their older sister, Maho. The story begins in elementary school, where Shuichi, Yoshino, Kanako Sasa, and Saori Chiba become friends. Shuichi becomes increasingly interested in dressing up as their correct gender identity, with feminine clothes. During a visit to Saori's house, Shuichi shows interest in a dress hanging in Saori's room. When Saori asks Shuichi if Shuichi wants to wear the dress, the response is 'No' , even though the sub-conscience thought was to want to wear it after all. Much later, Saori gives Shuichi several very pretty though expensive dresses.

Shuichi and Maho both sign up to be models. Maho asks their mother if Shuichi was accepted as a girl or as a boy; but, then upon consideration, she says that it doesn't matter, anyway, since Shuichi looks so cute and feminine. Shuichi ends up quitting modeling later on, since it was mostly Maho's idea for the both of them to become a model in the first place.

Yoshino gives Shuichi some clothing from the wardrobe of the two siblings, Yoshino's clothes and the older sister's clothes—including a cute sailor fuku school uniform—since Yoshino always hated wearing that style. Shuichi accepts the gifts, much to Saori's dismay, since Shuuichi did not accept clothing from her. Sometime during this period, Shuichi and Yoshino meet a transgender woman, Yuki, and her male partner, Shiina.

Near the end of a school year, Yoshino and Shuichi are often seen going on "dates" together. Their dating starts off by being together on the train, and progresses to the point that they walk together in public, dressed in ways that show the gender identity that they both prefer as authentic: Yoshino wears masculine clothes, whereas Shuichi wears feminine clothes and a wig. If asked their names, Shuichi will say their own name is 'Yoshino Takatsuki', and Yoshino will say their own name is 'Shuichi Nitori'. During this time, the two become very close, and Shuichi sees Yoshino as someone who understands Shuichi's authentic self for who they are, since Yoshino strongly believes that one should wear the type of clothing one wants to.

One day, Shuichi shows up at school wearing a girls' school uniform, much to the dismay of the teachers, and the disgust of the school classmates. Shuichi's classmates wrongly think Shuichi is a cross-dresser, and start talking behind Shuichi's back, saying that Shuichi is supposedly a pervert. As a result, Shuichi goes home early, and stops coming to school for some time.

As Shuichi gets older, their voice breaks. The signs of puberty become increasingly troubling and prominent as they go from getting acne, to growing taller and, eventually, to developing a strong jawline. At this point, they are no longer able to easily present out in public as a girl.

However, Shuichi still wishes to be a girl. This is evident in the ending, when Shuichi tells their girlfriend, Anna, that they want to transition. Anna, deep down, comes to know that being a transgender person is who Shuichi authentically is, and that Shuichi knows that it may be uncomfortable for Anna to acknowledge, but Anna must know that Shuichi's future may include transitioning to that of a young woman. With these revelations exchanged with each other, Anna confesses that Shuichi was the first person to get to know her as an intimate friend, who also consented to date her. Shuichi confesses to Anna that they have always loved her all this time, even after their dating relationship was suspended. Even with this 'baring of their souls', Anna accepts Shuichi as their authentic self, and they agree to continue their dating relationship anew, implying that they will marry and be together for the rest of their lives.

In the Japanese language, Nitori's first name of 'Shuichi', given to them at birth, is masculine, and means excellent in all criteria, person of excellence. During the times that this character is presenting as their correct gender of female, they use the name 'Yoshino', borrowed from their best friend. The first name 'Yoshino', is feminine, and means a fragrant, aromatic girl who is very beautiful, having a good heart, and a dweller on the plains or lowlands. Later in the manga story, when they become an adult, Shuichi/Yoshino changes their name to 'Lily'. In the Japanese language, the first name 'Lily' is feminine, and means the lily flower.

Shuichi (left) and Yoshino in promotional art for the anime

Shuichi's profile page from the anime

Saori dressed as Romeo for the Cultural Festival Play

Shuichi in male mode in their bedroom, studying

Shuichi and sister Maho, the householder declares that both are very cute girls

Shuichi worrying about their voice changing 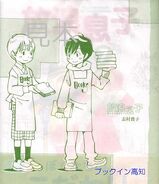 Shuichi and Yoshino as children

Shuichi with Yoshino and the protagonists of Aoi Hana, another Shimura manga 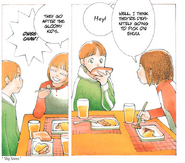 Shuichi as a female for the first time

Shuichi dressed in female attire in the manga 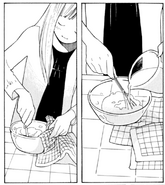 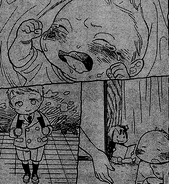 Shuichi as a baby

Shuichi as a toddler 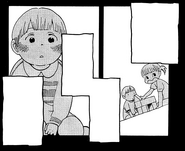 Shuichi as a young child

Shuichi as a waitress

Shuichi as a waiter

Shuichi in a cheerleader uniform and their second wig

Shuichi in their late teens with a younger version of themselves 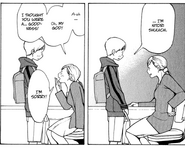 Shuichi at school, meeting their teacher for the first time. The teacher perceives Shuichi as a female student.
Community content is available under CC-BY-SA unless otherwise noted.
Advertisement